Poor Baby.  This morning, Husband informed me that he had a slight fever.  This didn't stop him from giving me a lot of smiles on Saturday when I made him pose for the photos below.  It does explain why he loves sleeping while being held up, has been spitting up more than usual, and is extra cuddly.  He slept almost all day yesterday, and there's been general fussiness unless he's being cuddled.  He's still been smiley, just not as content when awake unless he's being snuggled.

He has a love/hate relationship with Tummy Time now.  He loves having his head up, but he gets frustrated. If the TV is on, he gets easily distracted which we'll have to watch.  Little Miss can ignore the TV or only really likes to watch it briefly.  She prefers talking or reading or playing board games.

Baby is just so smiley.  I love it especially because he has such a goofy, little smile.  He can't wear caps though rocks the little bucket hat.  I keep trying the vibrating chair, and he is not a fan.  Maybe later when he can play with the toys attached, but it does not relax him.  He'd rather be on the floor under the playmat.  One day, last week, I let him nap on the floor.  I've always held the opinion that I don't care where my kids nap as long as they are sleeping.  Little Miss once slept on the hardwood floor under my parents' kitchen table. 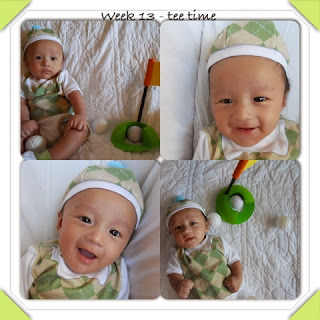 Posted by princessapr at 9:51 AM