I finally have pictures of Baby smiling!  He's been smiling lately, mostly at his sister.  He thinks everything she does is funny.

This week, he finally caught the ick that we all had.  Poor little guy is congested and that causes him to spit up a bit.  Plus, he's clinger than usual.  He's a trooper though.

He's becoming so strong.  He's been trying to roll over and settles for a lot for scooting and little baby crunches.  He loves to hang out in the Baby Bjorn even though he acts like we torture him when we strap him into it.

He has been eating a little more frequently, but I think the sucking helps soothe him while he's not feeling well.  Or he's growing.  Or both.  So far, he is still sleeping well overnight at least.

So, no complaints.  He's really just a good little baby, and I'm not just saying that because he loves me so.  We are entering my favorite part of babies, too.  I love it when they start to have personalities and can start doing things or even just using their hands or following you with their eyes.  It's like, at some point, babies just start liking you instead of just needing you which makes things more worthwhile. 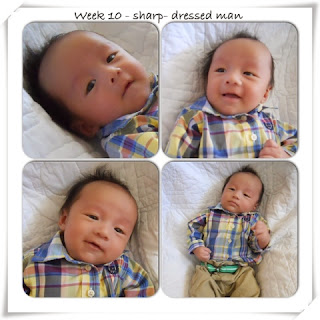