It's been a long time, but I've been glomming all things The Good Place today after last night's series finale.  So, today's Sexy Friday is Manny Jacinto who is just adorable, and he makes Jason so lovable on the show even though I'm sure someone like Jason would be totally annoying in real life.  He's just wide-eyed on the show. 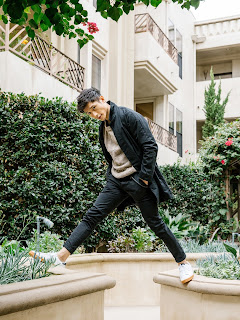 Posted by princessapr at 3:52 PM No comments: Links to this post

I knew I would cry, and I did - early and often.  At what point, Husband just turned his head and I shielded myself yelling, "There's nothing to see here!"  I really liked this show.  I didn't fall quickly, but I liked it.  It was like a slow burn.  Then, I'd look back at the seasons and marvel at it.  I wasn't sure how this fourth season was going to go, and it took me some time to get into the rhythm, but it was a close-to-perfect finale.  It is unclear if my excitement for Brooklyn Nine-Nine next week will be greater than the hole The Good Place left.  Once I stop crying, maybe I'll rewatch and catch all those little things I missed throughout.  Sidenote: I didn't understand most of the Jacksonville Jaguar jokes.

Posted by princessapr at 1:27 PM No comments: Links to this post

Email ThisBlogThis!Share to TwitterShare to FacebookShare to Pinterest
Labels: tv

January was a fun month.  In the beginning of the month, we celebrated a belated holiday with the In-Laws.  We had dinner out and then went back to our apartment for dessert and presents.  I can't even handle the cuteness of all the kids together.

The very next day, Captain and I took the Metro to The Kennedy Center to see the play Don't Let the Pigeon Drive the Bus.  He used to be scared of the Metro and is no longer!  Because I'm an idiot, I bought 4 tickets to the play because I can't work the Internet.  So, I gave two of the tickets to Sister-in-Law and Nephew.  We met in between the two performances for lunch.  After lunch, Captain and I did the fun virtual tour of The Kennedy Center with Pigeon on the app.  The wifi was a little spotty so we didn't complete it, but we did get a pin and had a lot of fun. 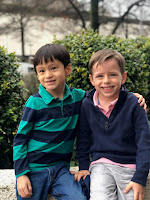 The next weekend, Husband was out of town on an annual trip.  So, the kids and I did some cooking and baking and had a movie night (101 Dalmations, the original animated film).  We did dinner out with the In-Laws.  It was a lot of fun.

The next weekend, Little Miss had a Latin party which is a total thing.  She won second place in a costume contest.  I went to a Housewarming party and a couple of happy hours.  Overall, it was a pretty relaxing long weekend.  Our Sunday Family Movie was Star Wars (A New Hope).  I did not fall asleep once through this viewing, too.

The last weekend, the kids and I went back to The Kennedy Center for Lunar New Year (China).  I think I'm going to have to skip Korea this weekend.  I just need to do some things at home.  The lanterns were beautiful, and the kids had a blast with crafts and costumes.  We also completed the Virtual Tour and got certificates of completion!  And then everybody melted down, and we came home.

Food front:  I bought myself an Air Fryer for Christmas so we used that quite a bit.  In January, we air fried everything from veggies (butternut squash and broccoli and brussels sprouts) to pot stickers, chicken tenders and onion rings.  The kids and I made chocolate donuts in the oven, homemade baked mac and cheese, parmesan chicken tenders, chicken romano and lemon pasta, broccoli cheese soup, champagne cupcakes with champagne buttercream, the yummiest vanilla cake, and circus cupcakes.  There were also brownies and sugar cookies.  You can find our updates and recipes here on our Cooking/Baking Instagram page, @A4MinimalEffort.
Posted by princessapr at 11:08 AM No comments: Links to this post

Our kids are picky.  So, we've tried new foods over the year - some have been documented here.  Well, Little Miss has created a 64 food bracket (though we will be taking longer than the typical March Madness bracket to complete).  We will crown the best new food which, I mean, has to be a dessert, right?  We'll see!

So, we're in the process of negotiating our 64 foods.  They are broken up into 4 categories - fruits & vegetables, sides/snacks, main dishes, desserts.  We have a pretty solid list and both kids have participated.  Captain, for example, wants bacon onion jam and, separately, avocado toast though I have to wonder how they would be together.  Anyway, Little Miss has chosen a few.

We are in the process of coming up with a scale to weight each of our reviews.  I think we'll start in the next few days.  So, stay tuned!

In the meantime, what's your favorite food?
Posted by princessapr at 11:26 AM No comments: Links to this post

Book Opinion - The Secret She Keeps

I really like HelenKay Dimon's romantic suspense books. I love the steam and the action. I don't read for the mystery so if you want a good mystery, maybe this won't be for you.

This book is the second in a series, The Secret She Keeps. You don't need to read the first book to read this one though I'm a stickler for order. You just need to know that there are two brothers, Hansen (in the first book) and Connor (in this book). They have a sister who was killed prior to the books and each brother handles the murder and loss differently and on a different timeline - which, frankly, is convenient for the books.

Connor takes some time off from work and rents a cabin on Whittaker Island. On his first night, he's attacked. Turns out, this is the meet cute. The heroine gives him stitches. In the head. Sorry I spoiled the first two chapters for you. Anyway, they're super cute together in between attacks, threats, and a dead body, but there is also island quirk which is kind of like small town quick but surrounded by water. Solid book and, if that doesn't sell it, Connor cooks Korean food (he's half Korean). So, you know. Sexy.

Posted by princessapr at 11:22 AM No comments: Links to this post

This week, I read Almost Just Friends by Jill Shalvis. I stayed up late to finish this one last night (this morning?)  I really liked it because I love Jill Shalvis's characters and style.  I love that both main characters were flawed but really saw each other and that didn't change.  The romance was in figuring out how to believe in the happy ending - and logistics which are figured out easily in romance novels.  The secondary characters are also complex and fun and add to the story, are part of the story.  You have to suspend a bit of disbelief (or a lot), but I'm willing to do so if I leave a book with happy feelings.  More people should read romance for the happy.  Also, I like this series because you don't have to read the books that come beforehand, but of course, I do because I'm a stickler for book order.  That said, I have a horrible memory so I couldn't tell you anything about the previous books at all.

Posted by princessapr at 3:40 PM No comments: Links to this post

Book Opinion - The One for You

I read The One for You by Roni Loren last week. I really liked this one. I think it was well-rounded, and I liked the characters. As with the first book in this series, it was a tough read because of the content. I still have some complicated feelings about a series with a school shooting as part of the characters' past. This book had a lot going on which just made it that much more of an emotional read. I did enjoy it and did root for the characters to find happiness. I wish, as I always do with series, that I remembered the previous books better. As a long-time reader of Roni Loren, I love seeing her evolution as an author. I've always enjoyed her books, but I find the balance and smoother and seamless between scenes and characters and the arc very natural (or, as natural as a romance can be which is, by definition, a bit of a manipulative genre).

Posted by princessapr at 12:47 PM No comments: Links to this post

Book Opinion - The Day the World Came to Town

I will finish this book today, The Day the World Came to Town: 9/11 in Gander, Newfoundland by Jim DeFede.  I was inspired to read this after seeing the musical, Come From Away.  I knew the story from researching the play after the Tony Awards, but the details and stories are so amazing.  It's so hard to imagine a community just dropping everything to help.  I know that there are incredible individual stories centered around 9/11, of people helping strangers, but the thoughtfulness of the extras provided and the relationships formed are inspiring.  The book is currently free with Kindle Unlimited or you can purchase the paperback so your mother can read it like I did.  As much as I gained by reading this book, I think I will welcome a return to reading romance next.

Posted by princessapr at 5:00 PM No comments: Links to this post