I did a lot of reading. After a spell of heavier books, I jumped back into romance. I'll admit there was a mix of down and dirty and sweet so be wary if you use this for recommendations. Complications was my rare non-fiction book. I liked it. The author made things easy to follow. It gave great insight in a clear, concise way. I'd recommend it and I'd even go so far as to say I'd read his latest book.
Posted by princessapr at 12:46 PM No comments: Links to this post 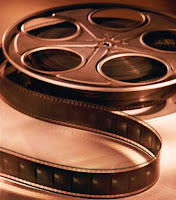 Little Miss and I watched Alexander which was an adorable, silly family movie. Then, Husband saw the first movie in years in the theater. He put his money where his mouth is and followed his girl, Amy Schumer, to her big screen debut. It was a pretty hilarious movie. I'd see it again just to catch the jokes we missed from laughing so hard. It's a bit naughty for those who don't like those types of films though. Friends and I saw Magic Mike XXL, and it is a movie you need to see with girlfriends. It was fun and silly and everything you'd expect.
Posted by princessapr at 12:12 PM No comments: Links to this post

Little Miss has always had questions about, well, everything.  So, following up baby talk with periods seemed natural.  Luckily, she hasn't bridged the gap between the cycle and birth and asked about that yet.  She is totally disgusted by the entire menstruation process.  She is also really angry that it seems that girls have to deal with this and boys do not.  I'm hoping that she forgets about it for awhile.  Otherwise, she'll waste these next few years being an angry emotional stress ball.  If I have to deal with all those emotions, there better be hormones attached to them and not just because the world is unjust.  She should start to work fighting gender inequality some other way.  I don't think she'll win a battle over Mother Nature.
Posted by princessapr at 12:51 PM No comments: Links to this post

Little Miss took a few days to travel with her cousin and my parents.  Captain was pretty good without her and loves the attention.  However, he did spend time looking at her bed and playing with her things.  He was extremely excited when she returned though.  For convenience, we put him into bed a few minutes before her.  He screamed his head off for 10 minutes.  He'd stop crying whenever she came into the bedroom and then start up whenever she left.  As soon as I tucked her in and left, he was more than content with his big sister in his sights and stopped crying in the middle of a sob and fell asleep.  Vacation should be interesting.  They're sleeping in separate bedrooms.  I don't know if there's a cure for Little Brother Syndrome, but he has an aggressive case of it.
Posted by princessapr at 12:55 PM No comments: Links to this post

It turns out July was a busy month!  We spent the Fourth of July with the Inlaws.  It poured so we were inside eating and watching the fireworks on tv, but we did get about 5 minutes in the pool.  The nephews were there as well, and the cousins had a good time together. 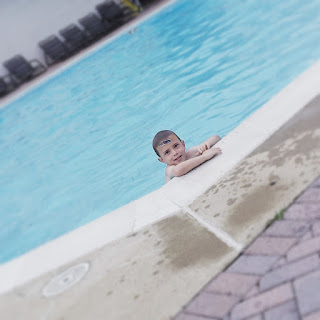 The second weekend was Nephew's fifth birthday party.  It was an Ironman theme (though many of the other superheroes made an appearance).  Captain and I went in theme clothing - though Captain didn't care for the mask.  It was a good time.  I can't believe Nephew is 5!

The next day, Husband played golf with a friend's husband while Captain, my friend and I went to her pool.  It was really nice, and the pool was beautiful.  Little Miss was in Florida with my family.  We had a lovely dinner at my friend's house before heading home. 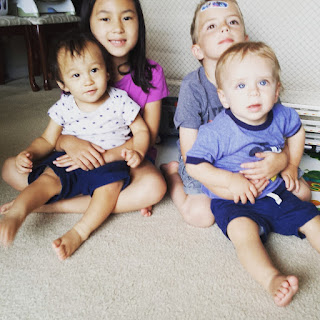 The third weekend, I met friends for Thai and then we went to see a movie.  After, I got to pick up Little Miss after a week away.  It was nice to have her home, and everyone was thrilled to see her - but no one more so than Captain! 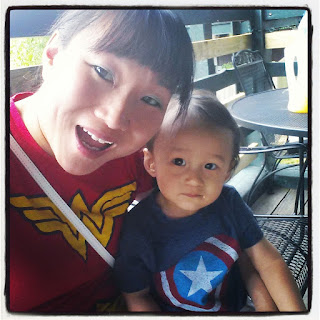 The fourth weekend, we mostly just ran some errands - Target, the library, the grocery store.  It was busy and hot, but Little Miss loves to just drive around and be helpful. 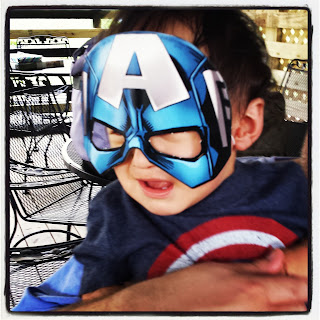 Towards the end of the month, I took some time off.  I took a half day and brought Little Miss to work with me.  She loves coming to work.  She watched a movie and mostly hung out and write me little notes.  My parents met me at my office after lunch.  Then, we all went to The National Building Museum which I've never been to before.  There is a "beach" exhibit currently which is basically a giant ball pit.  It was insane.  It's been many years since I've been in a ball pit, and it was much easier as a kid from what I remember.  Little Miss made a friend, and had a blast though.  We had dinner and then headed home. 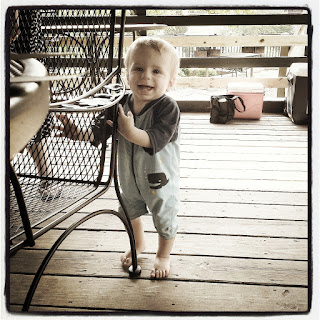 The next day, I met friends from out of town and out of country.  We did The Library of Congress, The Folger Shakespeare Library, walked by The Supreme Court, Dupont Circle, went to The National Geographic Museum, and drove by some other sites.  A local friend hosted us for dinner, and it was a really good time.  I got to do things and see some sites I don't normally (or haven't ever) see. 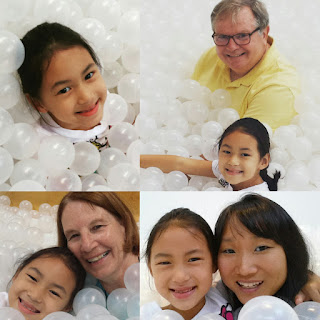 Posted by princessapr at 12:59 PM No comments: Links to this post