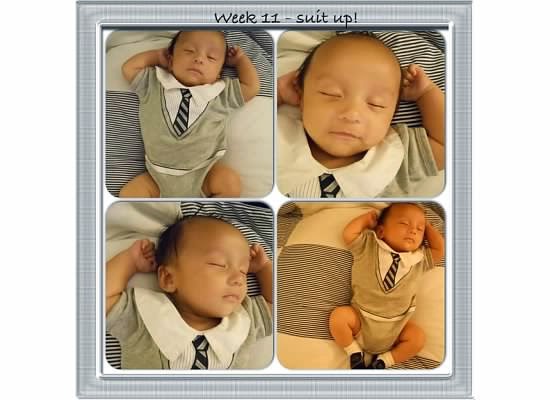 Baby is doing well.  In this case, not much has changed since last week (as is the trouble with weekly posts).  He's in the 75th percentile in height which, let's face it, is as good as a kid of mine is going to get.  He weighs 12 pounds.  He received a bunch of vaccinations and did not care for that at all.  The doctor did say that it was time for Tummy Time so we've been doing that at home.  He doesn't seem to like it, but he doesn't seem to hate it.  He tolerates the tummy time with a pained expression, but he doesn't fuss.

He's still an amazing little baby.  We've been so lucky to get babies with pretty even temperments.  He eats and sleeps well.  He's still eating 4 ounces a time between 5-6 times a day.  He still loves to be swaddled or held.  He has been smiling more and more and is much more alert.  He loves looking around and moving around.  He's been caught watching tv lately.  He holds his head up very well right before his neck gives out.
I think I bit off more than I can chew with the weekly photos, but I'll see how long I can keep going.  This week, I took the photos in practically the dark late on Sunday night.  Next week, I'll try to do them during the day (perhaps in his new "tuxedo").
Posted by princessapr at 3:57 PM