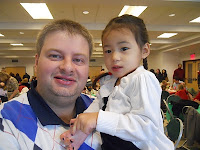 Last weekend, Little Miss was a little under the weather, and we pushed her hard. On Saturday, we took portraits with her little cousin. It went relatively well. She gets tired waiting for the proofs and sitting through lunch. She also got to go to the toy store. She fell asleep on the way, but I woke her up because I promised her we'd go. She perked up in the store and then went home for a nap.  I actually had to wake her up after her nap on Saturday because I didn't want her to sleep through dinner or not sleep through the night. She woke up and cuddled (her sign that she's sick). She did eat dinner and pretty much went right to sleep. 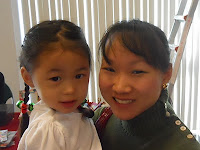 On Sunday, we woke up early to go to Breakfast with Santa. Little Miss was a bit sluggish and still not feeling well, but she did perk up once we got there. She split my pancake plate and, I'll admit, she ate most of it. She was really good with Santa and chatted quite a bit with him and Mrs. Claus. I painted her nails dark purple and she showed them off and asked for "presents". She didn't get specific yet so her wants are still attainable. Santa can definitely bring her "presents".
After Breakfast with Santa, she asked to go home and rest. We were supposed to go to a Baby Shower, but Little Miss woke up choking a little from her cold and it panicked her. So, we cuddled some more while she slept for another 2 hours. She woke up a whole new and healthy kid though. I think she felt much better because she managed to give her germs to Husband and me (though he contracted this round of sickness more than I did, but it is his turn). The evening brought dinner, coloring, and a bath. No big plans this week or next weekend though she asked to go back to the library next weekend for more Max and Ruby books so we'll do that. All pictures are from Breakfast with Santa. 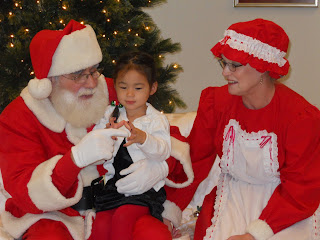 Posted by princessapr at 1:53 PM