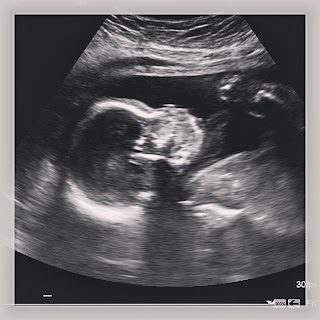 We're halfway there! Not scary at all. Really. You can find more information here, but we had the big 20 week ultrasound. The radiologist and tech estimated the baby weighs about 13 ounces but is measuring a couple of days behind where we are which is normal and doesn't mean too much. It's not an exact science and the due date is probably a little off. It was confirmed that it is a boy (again). He is still very active, mostly at night. All the ultrasound photos were blurry because he was constantly moving hands, legs and body. Everything seems to be progressing as it should, no cause for alarm.  Unfortunately, Husband had to work and couldn't make the ultrasound, but I brought my mom.  It was nice to have someone with me, and she had a lot of enthusiasm and would have asked the same questions Husband would have had.

Poor Little Miss is very eager to feel the baby move and hasn't had any luck so far.  Maybe this weekend, I'll have a bit of chocolate and see if she'll get lucky.  He seems to quiet down whenever she is near or talks to him.  Last night, she was quiet so he didn't know she was there and she just barely felt some movement. Next doctor's appointment is in two weeks.

Posted by princessapr at 2:45 PM