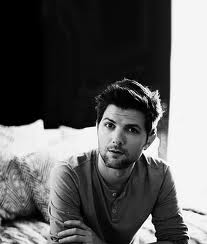 OK, maybe Adam Scott isn't traditionally sexy. That said, I find him absolutely adorable. Sadly, I had no idea that the first project I remember seeing him in is Piranha though I must have seen him in his tv appearances and just don't remember. I really liked him in Friends with Kids and have been absolutely obsessed with him in Parks and Recreation. I just got to the point in the series where he made his first appearance and am flying through the next season where he was made a series regular. Do not confuse him with golfer Adam Scott - though that Adam Scott is also kind of attractive. See below:

Hey! That's two Adam Scotts for Sexy Friday - two for the price of one.
Posted by princessapr at 12:00 AM