As I may have mentioned before, Little Miss and I are in a wedding in May. This past weekend was the surprise bridal shower and surprise bachelorette party. 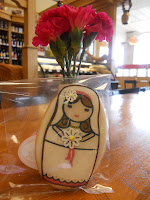 The theme of the bridal shower was nesting dolls. It started with the invitations and extended to the cake, favors and prizes during the shower. The cookies above were the favors, and they were absolutely adorable. I am not lying when I tell you that half of the pictures I took over the weekend were of the cookies. The cupcakes are below. One of the bridesmaids did a fantastic job of arranging and decorating. I know I couldn't have done as good of a job. 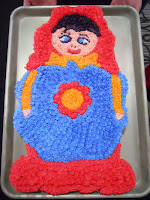 Although, the shower was a surprise, the bride knew she'd be getting a shower. So, in preparation, she had her fiance bring a gift for Little Miss. The Little People bridal set was a great gift. Little Miss plays with it often already. You can't see it in the picture, but Little Miss is also wearing a t-shirt that says "I'm the cutest Flower Girl ever". She'll be wearing it some more so I'll have to take a picture of it before the whole journey is over. 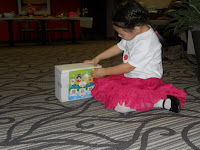 Last, but not least, here is a photo of the bride with her bow bouquet. After the shower, we all kidnapped the bride for a surprise bachelorette party. We had a nice dinner in the city, went around the city and then spent the night. We had a lovely brunch the next month to cap off a fun weekend. It was a fantastic weekend, but I'm looking forward to lying low this weekend! 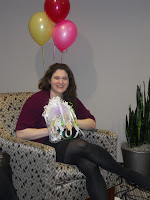